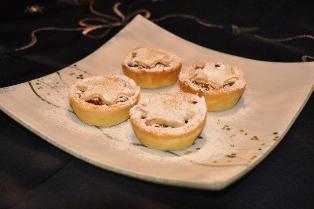 The first mince pie recipe dates back to the middle ages, making it a very traditional Christmas cake. Since it came from England, it is mostly known in the English speaking countries.

I never baked them since my background is Polish, so these little treats were new to me. I consider them an easy Christmas dessert since you can bake them ahead of time and freeze them.

Mince pies are relatively easy to make, but you need to prepare the  mincemeat ahead of time, since it needs to mature.  So if you want to have homemade mince pies during your holidays, then you need to get an eary start and make the mincemeat middle of November.

If you are lucky and live in an area where you can buy readymade mincemeat, then it is a matter of minutes and you got yourself an easy Christmas dessert. I really hope that you will enjoy this mince pie recipe.

Prepare the mincemeat as directed on my mincemeat recipe page.

You will also need:

You can heat the mince pies in a microwave and serve them with a scoop of vanilla ice cream, a heap of whipped cream, or a rum butter topping.